By Steve Richards on October 28, 2015 in Sports Articles, The Reporter 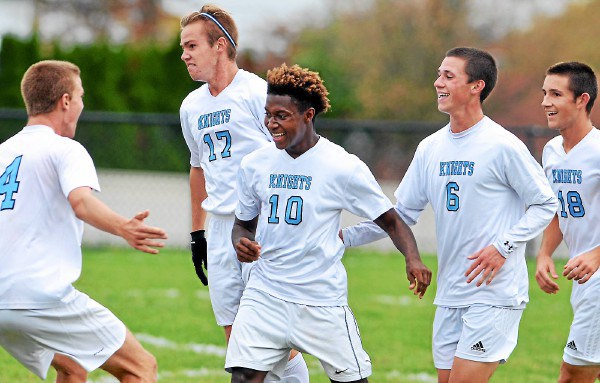 **Note: This article originally published in The Reporter and on PaPrepLive.com**

TOWAMENCIN >> As the eight seed in the District 1-AAA boys soccer playoffs, North Penn head coach Paul Duddy knew the opening half would be key.

“We wanted to come out strong in the first half,” Duddy said. “We talked about home field, and we had a little bit of that wind behind us.”

His team responded to that game plan, as the Knights dominated the opening 40 minutes, holding threatening possession and eventually scoring two goals to put away 25th-seeded Strath Haven 2-0 in the first round of districts Tuesday afternoon.

The first goal of the game — which also ended up being the game winner for North Penn — came at almost the half hour mark. A long ball from Colin Jerome was collected by senior Liam Parker, who raced past his defender and slipped the ball behind the Strath Haven keeper to give the Knights a lead they would not relinquish.

“That first goal, we really needed,” Parker said. “We had a lot of chances before that but we just couldn’t convert and that really changed the tide of the game.

“We were definitely faster than them. Playing through balls on this narrow field definitely helps us out.”

The home team’s second goal of the match came in the same fashion, this one started by Owen Nakatani. His ball was gathered by striker Musa Sheriff, who beat Panther keeper Dixon Damico to the ball and had a tap in once he dribbled around the diving goalie.

“I think we had a little bit of a speed advantage and it made a difference in both the goals,” Duddy said. “It’s good to see… they’re fast enough to get around a defender. Speed is tough to defend.”

Shariff and Parker both proved to be thorns in Strath Haven’s side throughout the match, but particularly in the first half.

A ton of first-half possession and a 2-0 lead will help any defense, but North Penn did a great job limiting any real scoring opportunities for Strath Haven. This rang especially true in the final 40 minutes.

“I thought we defended well,” Duddy said. “We were content to just keep it out of our box and not let them get one back on us (in the second half). It was a good game.”

Knights keeper Jordan Katz was solid in protecting his net, being aggressive when it was called for and making five saves in the match to earn a clean sheet.

All told it was a solid win for North Penn, and a good opening test on their playoff journey.

“(Strath Haven) has got such a great tradition and they’re so well coached,” Duddy said. “As soon as I saw the draw I thought ‘Uh oh. We better be ready to play.’ That was just like one of our league games to be honest with you. Two teams going hard and challenging every ball.”

Speaking of league games, North Penn hosts Suburban One League Continental Conference foe Pennridge — which beat ninthth-seeded Boyertown in penalty kicks — Thursday. The two teams split the regular season series, each defending their home field. The Rams are the No. 24 seed in the District 1 bracket.

“We need to play well again Thursday,” Duddy said. “If you don’t play well at this stage of the season you’re done.”

First and foremost, I love anything Philly sports; that includes the Phillies, Sixers, Eagles, Flyers and Union (that’s a soccer team). I’m also a fan of the English Premier League squad Manchester City. In the college ranks, I follow the football, basketball, and baseball teams of both Penn State and the University of Texas. I work for SportsNetworker.com, where I am the COO. I also cover a variety of high school sports for The Reporter and PaPrepLive.com as a freelance writer. On the broadcast journalism side of things I'm a co-host of the Prime Time Fantasy Football and Showcast podcasts on Next Level Radio. You can check that out right here. You'll also find me on Twitter discussing a multitude of things. Feel free to give me a follow over there.
View all posts by Steve Richards →